“It’s a piece of cake.” How many times have we said that about simple math, riding a bicycle, or learning a new task? How could I even suggest that such an important, often monumental, usually painful, task as forgiveness simply be a piece of cake?

I’ve heard forgiveness, or lack of, compared to various tangible items and situations: drinking poison and expecting the other person to die,

carrying heavy rocks around in a backpack, being chained to another, laying down a heavy load, cleansing your hands, burying a hatchet…and so many more.  But this week I heard a whole new spin on forgiving…it’s like cake!

I like cake.. but a good cake can be really complicated. The right ingredients and measurements, containers and preparation, altitude and preciseness all factor in to the final outcome… the appearance, the taste, and the satisfaction. And if you want it to look really good and appealing…that’s a whole other story!

As I sat with a trusted friend discussing the intricacies and fallacies of forgiveness, she said it:

Forgiveness is like cake. We can say we have forgiven and cover it up and push it to the side saying ‘there, that’s done’; but it’s better to cut into each piece and see what’s in it…deal with and really be done with it.

Colossians 3:13 says: Bear with each other and forgive one another if any of you has a grievance against someone. Forgive as the Lord forgave you.

Researchers at Johns Hopkins say: Your health depends on it…Forgiveness is not just about saying the words. It is an active process in which you make a conscious decision to let go of negative feelings whether the person deserves it or not.

My friend says: Cut the cake.

I like word pictures. To me that was an incredibly practical piece of advice. How many times have I forgiven someone…just like throwing a blanket over a virtual plate, or crate, of offenses and shoving it off to the side. Out of sight, checked off my spiritual to-do list, a temporary respite from the heaviness, and presumed guilt and shame? Or felt like a good girl, doing the right thing and forgiving as Jesus commanded… Until something rose up in me again…a face, a memory, another offense.

Cutting cake can be messy…scattered crumbs and icing clumps can be annoying, sticky, and hard to clean.

Relationships can be messy too. Just like cake…the result of improper ingredients, faulty measurements, broken containers, poor preparation, attitudes, expectations, and simply being broken humans in a broken world.

Cutting it open means exposing it. What’s really inside and behind 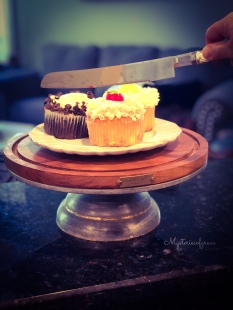 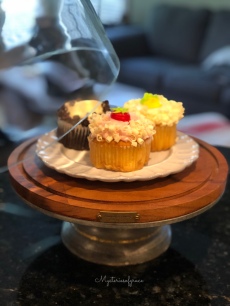 and under? It can be messy, painful, hard…but freeing. It means naming it: the offense, the hurt, the pain, the injustice, the whys, the why nots, the what-ifs, the never-going-to-be. It also means uncovering truths, lies, fears, expectations, hopes. It doesn’t mean we will get all the answers. It simply means we will really be able to see the full scope of our hurt and know that we  are intentionally, specifically forgiving the offense and all that it has meant to us. It is emptying our plate and starting fresh, expectant.

Three of the biggest challenges I have heard about the difficulty of forgiving are:

Oh, but it matters. It deeply matters. You matter. And you will remember…consciously, subconsciously, in your patterns of behaviors and responses…you remember. And you can live out of that place of woundedness, pain, and unforgiveness; or you can be healed to remember and live from a place of deliverance and freedom.

Mark 9:42 says Whoever causes one of these little ones who believe to stumble, it would be better for him if, with a heavy millstone hung around his neck, he had been cast into the sea.

Romans 12:17-19 says Repay no one evil for evil, but give thought to do what is honorable in the sight of all.  If possible, so far as it depends on you, live peaceably with all. Beloved, never avenge yourselves, but leave it to the wrath of God, for it is written, “Vengeance is mine, I will repay, says the Lord.”

I love the Old Testament story of Joseph. Hated, rejected, betrayed, sold into slavery, misused, falsely accused, forgotten. He knew exactly what had been done, what he was forgiving, and most importantly how God had given him the resiliency and faithfulness to be able to proclaim in Genesis 50:20 “As for you, you meant evil against me, but God meant it for good.”  He cut the cake. He recognized the evil intent, the mistreatment, the unfairness… but also recognized that God had used all the mistreatment, all the detours, all the pain and suffering to bring him to a place of growth and purpose. A place of freedom. I believe He still does that in our lives today.

So if you’re reading this, maybe you’re just curious or maybe you have a need. A hurt, an unhealed tender spot, a nagging dark shadow, an offense to forgive.

So pull up your cake plate, a knife, and your willingness. Find a trusted friend or counselor  and cut the cake. Inspect it. See what’s inside, what it’s made of…piece by piece. You’ll be glad you did. Then frequently consider, what’s on your plate?

Where there is no guidance the people fall, But in abundance of counselors there is victory.         Proverbs 11:14 NASB

One thought on “Forgiveness Is Cake…”

BY GRACE THROUGH FAITH

A Tennessee gal with a love of all things vintage, farmhouse, and DIY

Inspirational Quotes To Motivate Your Life

The process of being a child of the King

Bloom In the Dark

We are His dwelling place, His present tents.

the story of a girl saved by grace

Grace Within the Race
this homeskillet life