“With great power comes great responsibility…” Who said that? Winston Churchill? Someone during the French Revolution? Maybe it was Uncle Ben in the Spiderman movie? Opinions vary; but they tell you in Sunday school, when in doubt, just say “Jesus.”

Everyone to whom much was given, of him much will be required, and from him to whom they entrusted much, they will demand the more.  -Jesus, Luke 12 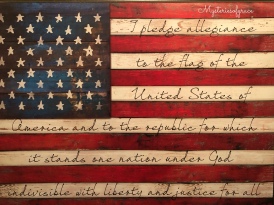 Today, July 4th, is Independence Day. And in the wake of a worldwide pandemic, violent, unpredictable rioting, political upheaval, a volatile social storm, and general worldwide uncertainty about the future, I am thankful for today’s freedom. It is a valuable, weighty gift that should be handled like a piece of fine china or priceless work of art; because once it is trampled upon or broken, it is often tossed aside and forgotten.

My family loves history and can recite all the important dates, people, battles, and declarations. I just appreciate it, enjoy it, and walk in it. Freedom as a nation is an incredible blessing. As I see civil unrest, hatred, and division,

I don’t take it for granted. I am thankful to be able to think and write and speak and read and travel as a free American. But freedom is so much more than a declaration written on old parchment paper and filed away in the archives under watchful guard. Freedom  begins in the quiet corners of the mind and bursts forth in the heart and spirit like shadows of the painted reds, whites, and blues showering the sky.

For freedom Christ has set us free; stand firm therefore, and do not submit again to a yoke of slavery.  -Galatians 5:1

The apostle Paul wrote those words to a group of believers who were battling confusion and societal attempts to confuse or strip away their spiritual freedoms. We would be wise to tend his words:  Do not submit again to a yoke of slavery.

People have short memories and are easily swayed at times. Why would anyone choose to give up freedom and return to bondage? I have to wonder: Have people always been so angry? So confused and uncertain? Hopeless? Insufferable? I’m no psychologist. Or sociologist. I’m a fellow traveler but also an observer. And a learner. And someone who cares. 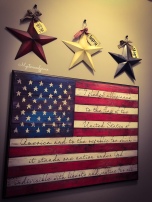 If there were a battle flag to represent emotional and spiritual independence, I propose that it would bear three stars, representing hope, identity, and awareness. I believe true freedom grows from those tended, nurtured, well-watered places.

Hope that there is more than the day to day struggles and battles with our own, and other’s, fragile emotions and faulty lives. Hope that we are not alone. Lack of hope breeds futility.  You’ve heard it: Why bother? Who cares? Whatever! When people have no hope, they have no direction. They don’t care or commit. To anything or anybody. Like a drowning person often flails and inadvertently pulls their rescuer under with them, they simply struggle to keep their head above water and fight for the next breath. Lack of hope kills life, motivation, purpose, and direction.

Identity: An inner knowing and resolve that we are more than just a fleeting breath that passes through the earth and then returns to dust. People are confused and don’t know who they are, who they are meant to be, what good and life-changing purposes they are capable of. People desire to be loved, accepted, and fulfilled. Their lives to have purpose and meaning.

We hold these truths to be self-evident, that all men are created equal, that they are endowed by their Creator with certain unalienable Rights, that among these are Life, Liberty and the pursuit of Happiness.  -Declaration of Independence

Lack of identity creates confusion and lack of direction. It mars the identity of and importance others. People become nameless, lifeless faces. Violence and disregard of life often follows.

Awareness that there is more than what we see, hear, feel, and touch: a fragile, temporal world filled with fragile, broken people. And that our

thought and actions affect more than the moment. They potentially have a ripple effect that can affect generations and alter history. Beliefs matter. Choices matter. Actions matter. It all matters.

I suppose the three could also be summed up in 1 Cor 13:13 And now these three remain: faith, hope and love. But the greatest of these is love. Faith instills hope, hope clings to purpose, faith clarifies identity, love kindles awareness, and awareness fosters love, identity encourages purpose, purpose gives hope, and on and on. It’s a beautiful circle of freedom.

Today I am thankful for American freedom and for those who have sown their time, efforts, prayers, and very lives into the fabric of our history. I am also thankful that, no matter what happens in society, there are inner, God-given freedoms that no one can take away. I am thankful to be ever-growing in hope, identity, and awareness of myself and others.

True freedom is not the liberty to do whatever we want; it is the strength to do what we should. That is also true bravery. May God grant us that strength.  -Ravi Zacharias 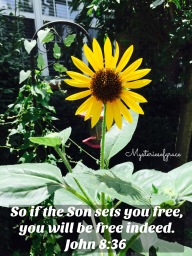 If my people who are called by my name humble themselves, and pray and seek my face and turn from their wicked ways, then I will hear from heaven and will forgive their sin and heal their land.  – 2 Chron 7:14

BY GRACE THROUGH FAITH

A Tennessee gal with a love of all things vintage, farmhouse, and DIY

Inspirational Quotes To Motivate Your Life

The process of being a child of the King

Bloom In the Dark

We are His dwelling place, His present tents.

the story of a girl saved by grace

Grace Within the Race
this homeskillet life